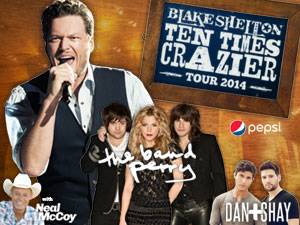 Blake Shelton with special guests, The Band Perry, present their Ten Times Crazier Tour on Friday September 12th, 2014 at 7:00 PM at The Sleep Train Amphitheater in Wheatland. Blake Shelton has charted 24 country singles, including 11 number ones and has been nominated five times for a Grammy Award. Blake is known for his stage presence and ability to entertain and interact with the crowd. The Band Perry are known for their single, “If I Die Young” which  reached number one on the U.S. Billboard Hot Country Songs charts and reached quadruple platinum status. This event is part of the Live Nation’s Country Megaticket and is sure to be  an unforgetable evening. Call Baja Limo to book your Sacramento Limousine Service at 916.638.1400 and leave the driving to us. Visit www.bajalimo.com to view our Virtual 360 Tour of our wide variety of luxury vehicles.